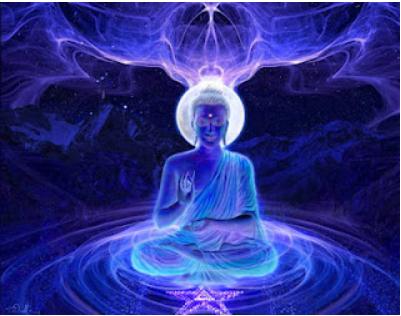 Wesak is the celebration of Lord Buddha's birth, enlightenment, and death which occurred during the month of Taurus. Wesak is that time of the Full Moon of May in which it is said the Christ gathers the entire Spiritual Hierarchy together in meditation to invoke the forces of Shamballa. The Buddha, representing these forces, appears and blesses all of humanity for eight minutes.

Through the united efforts of the Buddha and the Christ working together, there is opened a channel of communication between humanity and Those who guide our planet, enabling us to contact energies not otherwise easily available. So during this time, expansions of consciousness are made possible that are not possible at any other times.

In celebration with millions of other souls throughout the planet, Pranic Healing of San Diego held its first public celebration of Wesak, on the evening of May 5th. Although this was not a publicized event, over 30 people attended. Held at the California Institute for Human Science, the meditation room was beautifully decorated with candles, flowers, plants, pictures, Tibetan prayer flags and an altar with the Buddha.

In addition there was an ongoing slide show depicting various pictures of the Buddha, the Wesak Valley in the Himalayas, and Mount Kailash that overshadows the Wesak Valley.

The evening started with a 40 minute video of Master Choa Kok Sui lecturing on a wide range of topics. Then everyone engaged in Arhatic Yoga physical and breathing purification exercises prior to the meditation.

At the appointed time everyone gathered on their prayer mats. The ceremonial star of five and circles of seven and nine were formed by the Arhatic practitioners while the remainder sat behind them. Precisely at the moment of the eight minute blessing by the Buddha, everyone began the Wesak meditation recorded by Master Choa Kok Sui. We simultaneously joined millions of souls around the planet in honoring the Buddha.

The meditation lasted 30 minutes, ending with the water ceremony of communion from which everyone drank, and the blessing of a table laden with crystals, photographs, written wishes, and mementos. The evening ended with a communal sharing of good food and drink brought together by those whose attended.

It was truly a beautiful evening, filled with peace, joy and a loving kindness that lingered for days to come. We look forward with high expectancy to the next Wesak celebration in 2013 and invite all of you to experience this deeply moving event. 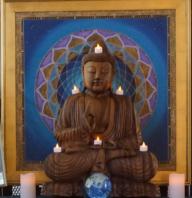